This is Part 2 of my Kettlebell Snatch Test Prep series. Read Part 1: The Art of 100.

5-minutes. A quick, easy, and generally painless allotment of time that just about everyday we’ll spend snacking, waiting in line for coffee, walking to the store, or chit-chatting. Conversely, that quick, easy, and painless time domain takes a dramatic shift when we apply it to max-effort exercise. 5-minutes becomes an eternity during high-effort training. This is mostly due to the fact it’s a bit of a metabolic conundrum: 5 minutes is way too long to maintain anaerobic energy, but not quite long enough to be all that aerobic.

1. At the time I entered the test, moving a 24kg more than a handful of times quickly became an anaerobic, strength and power-based activity.

2. There is simply no way to maintain a high-level of anaerobic strength and power for 5-minutes. Any future I had in passing this test, regardless of the bodyweight I entered at, would depend on me moving a 24kg kettlebell primarily aerobically.

This phenomenon was taught to my by the professional endurance athletes I coach. I regularly have them run 5k’s at a fully-aerobic heart rate, such as 185-Age (or I just make them run with their mouth full of water… seriously). I contrast the result with that athlete running an “all-out” 5k on the same course. The percentage difference between the two clues me into where their fitness and aerobic base stands, and what percentage aerobic vs. anaerobic they are running during an all-out 5k. I wondered what would have happened if I applied this logic to The Snatch Test.

My guess is that when I entered The Snatch Test for the first time, had I tested myself and “rested” every time my heart rate went anaerobic (180-Age*), I would have been resting every 4-5 reps after the initial burst of 20-25 reps, especially on my left arm. I realized that if I was going to have success with the 100 reps at 24kg and finish in under 5-minutes, I would need to boost that initial burst to 50 reps, not 20-25. I would also need to be able to maintain output at a minimum of 10 reps at a time, on both arms, for 5-minutes after that. This would enable me to knock out the 100 reps in sets of 10 per side from start to finish without blowing up.

I became pretty obsessed with aerobic-base building through total body mixed-modal applications. I used repeated submaximal 5-minute efforts with short recovery periods, balanced with periodic, single all-out efforts of 5-minutes, most typically with non-swinging or snatching, “hard to do wrong” exercises so that I could focus 100% on intensity, instead of technique. 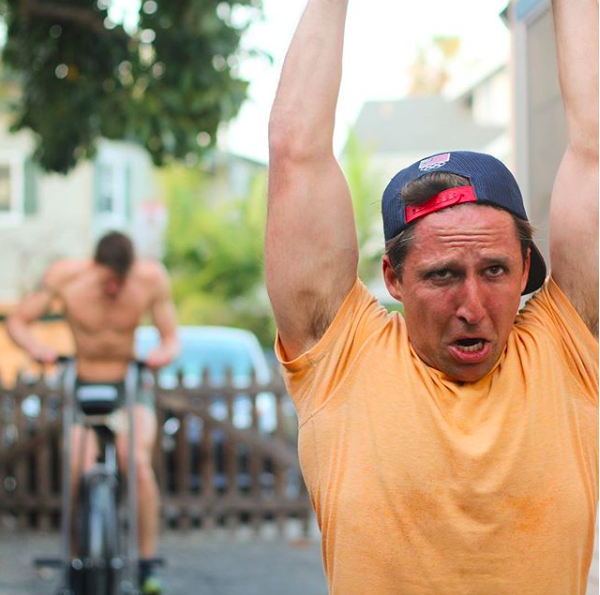 As a warm up, simply stay purposefully moving for 5-minutes with a light bell or two. Some of my favorites to mix in are 1-Arm Snatches, 1-Arm Swings, Goblet Squats, Overhead Carries, Rack Carries, and Step Ups.

Every workout starts with two 5-minute unbroken carries, where you switch between Farmers, Racked and Overhead positions. This strengthens your core, boosts your diaphragm activation, and activates many hard-to-work stabilizing postural muscles which support overhead activities like The Snatch. Start with two 12kg bells for men and 8kg for women.

Begin pushing at a easy to moderate pace, such as 55-60 RPM, for 5-minutes. Rest 1 minute. Repeat until you cannot maintain the starting pace, and work up to an hour. Increase starting intensity over time, ensuring that you can successfully complete at least 6 intervals.

Begin pushing at a moderate pace, such as a 1:55/500m pace, for 5-minutes. Rest 1 minute. Repeat until you cannot maintain the starting pace, up to an hour. Increase starting intensity over time ensuring you can successfully complete at least 4 intervals.

4-6 Rounds of 6-minute work periods that contain 3 exercises, each done for 2 minutes (6-minute rounds are just easier to time than doing two 90s rounds and one 2-minute round each time through).

One of my go-to bodyweight combos is Double-Push-Up Burpee-Pull-Ups for 2-minutes, straight into 2-minutes of 24” Step Ups, straight into 2-minutes on the Fan Bike. When you do this type of workout, to ensure you’re base building, set a specific intensity that you must hit every round. In other words, your performance should not get worse until after round 4 or 5, at which time the workout is over, IF you set the pace correctly. (It will take most at least 2-3 workouts to really understand how to pace “aerobic” pull-ups and what not.)

As a sample pace, I often do 10 Double-Push-Up Burpee Pull-Ups + 40 Step Ups + 70/50* RPM on the Fanbike (generally I’d either do the first minute on the fanbike harder and use the second as a semi-recovery). No rest between rounds. As many rounds as you can keep pace, 4 is the minimum. If you get to 10+ rounds, go a little harder each round - or don’t and keep piling on sustained mixed modal fitness

Maximal Efforts: One 5-minute work period as hard as you can go.

That’s it. The 5-minute Drill. Get creative and have fun with it, remembering a lot can go wrong in 5-minutes. For many the hardest thing in the world is learning to pace and go “easy”. However, when you develop a robust aerobic system that can handle sustained efforts of strength, the results are really magical.

All prices are in USD © 2020 Kettlebell Kings. Sitemap